Since the 1960s, Ibiza has gained worldwide fame for its tolerant personality and claim to freedom. A place free from prejudices and labels where it was possible to be oneself for the sake of happiness.

The island was known as a hedonistic and mundane destination that celebrated diversity. This spirit is still alive and on Ibiza sexual diversity is lived in a very natural way. In the city of Eivissa the codes of the LGTB community reign in areas such as Calle de la Virgen, La Marina and Dalt Vila. There are parties that are icons of the movement, such as the legendary La Troya, held weekly at the Heart club. 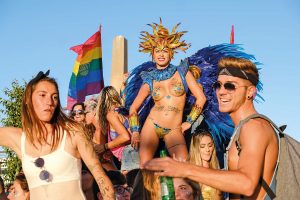 The multicoloured flag waves on beaches like Es Cavallet and also in the area of Ses Figueretes and the Ramón Muntaner street, both in Eivissa town.

In summer the island celebrates the Ibiza Gay Pride, which involves the whole community, showing that Ibiza is a destination that embraces diversity with parades, music concerts, and cultural activities.

Fashion travels to the eighties

«Adlib is pure magic and freedom»

A historic island full of surprises