The anniversary of il Cavaliere Pino

The parties of the Italian musical promoter Pino Sagliocco in his mansion on Ibiza are the most outstanding social, gastronomic and musical event of the summers. In 2019, Il Cavaliere Sagliocco, brought together more than 400 relatives, friends, artists and guests from around the world to celebrate his 60th birthday with a select Italian cuisine, traditional Neapolitan music and live rock and roll, as well as dance music by DJ Luciano Gaggia.

The cosmopolitan event featured the performances of opera singers Ainhoa ​​Arteta and Francesco Grollo, Kym Mazzelle, the band Smoking Rolling and the Napolibiza orchestra as well as spectacular performances of local artists and acrobats. The party was attended by international magnates such as John Hoffman, Javier Hidalgo, Gigi Sarasola, Ricardo Urgell and Paul Schindler. 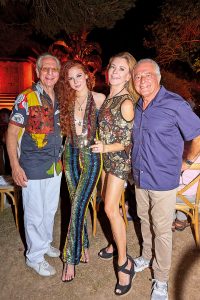 The best clubs in the world

The Mecca of live techno music